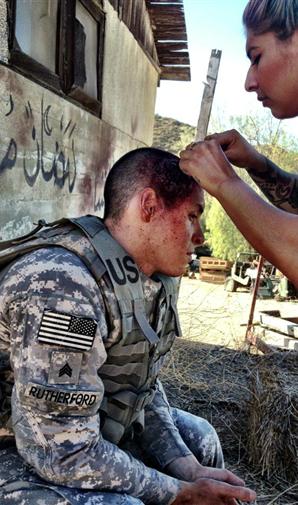 Afghanistan 2009: A lone soldier built for combat, Cain Stone, finds himself bloody and beaten in the middle of the desert. No weapons, no gear, no team. Fighting his body, he calls out through the vast emptiness, desperate to find Tommy, his friend and comrade. Nothing. His training kicks in. Back to base.
Meanwhile, from the back seat of a rocketing humvee, all hell breaks loose as the crew attempts to rescue a downed patrol.  As the crew dismounts at the horrific scene, Stone, weak and disoriented from dehydration,  tries to make sense of Tommy's disappearance.  His questions are answered as he sees Tommy sitting atop a hill. But Stone’s jovial spirit is shattered when Tommy tells him they were attacked and that he, Tommy, did not make it. Ignoring Stone’s questions, he warns of a cloaked figure in pursuit. Bathed in light, the humvee comes into focus. The soldiers pour out, their tactical dance seamless as they approach the attack site. Just as they approach what remains of the first body, the scene is stolen back to Stone.
Stumbling, weak, and disoriented, Stone calls out, pleading with the wind. Tommy’s voice urges Stone forward. Stone, too weak to be proud, too exhausted to do anything else, racks himself around, allowing his fears and weaknesses to float across the air, searching for a friendly ear, even that of a dead comrade. Immediately we are back to the soldiers, they examine the first bloody body, it is Tommy, and the second is that of Stone. The sound of a fading heartbeat tells us that Stone was indeed struggling in a very desolate place, and that his journey is now over.